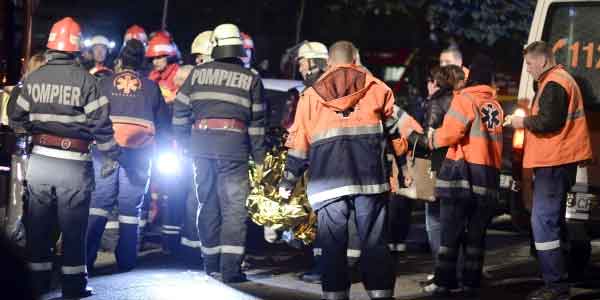 In a shocking incident in Bucharest, a fire in a nightclub killed 27 people and injured 184 others during a rock concert on Friday night the 30th of October. This was one of the worst mishaps in the capital of Romania in decades. 400 people mostly youngsters stampeded towards the single exit in order to escape the fire. The Colectiv club was located in the basement of a Communist era sport-shoe factory. The club was hosting a night show that featured the metal band Goodbye to Gravity on Friday night to launch a new album. Witnesses said that the fireworks began on stage and the pyrotechnic effects were the cause of the fire.

While many suffered burns and smoke inhalation others were injured by being trampled in the stampede. A pillar covered with foam panels and the ceiling erupted in flames followed by an explosion. The Deputy Prime Minister Gabriel Oprea had already initiated a criminal investigation into the cause of the incident while the health minister Nicolae Banicioui sent out a public appeal for blood donations. The Government on Saturday declared three days of national mourning in memory of the lives lost. Some of the worst disasters in nightclubs have been due to fireworks in the recent past.

Following the public appeal for blood donations, hundreds of people crowded the Bucharest Blood Transfusion Center and other centers to donate blood in the early hours of Saturday. The donors were from all walks of life including 40 local policemen and 50 anti-terrorist operatives. Leaders of political parties and churches joined the cause as best as they could with support for the bereaved families and those suffering injuries. National Research Development Institute for Mining Security and Antiexplosive Protection sent their specialists to investigate the cause of the fire. Prosecutors are already investigation crimes of willful destruction and manslaughter.